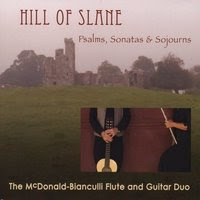 Psalms, Sonatas & Sojourns
Carl Philipp Emanuel Bach: Hamburg Sonata in G Major, Wq 133
Johann Sebastian Bach: Flute Sonata in E minor, BWV 1034
Arlo McKinnon, Jr.: Hill of Slane
Frederic Hand: A Psalm of Thanksgiving
Carlo Domeniconi: Sonata, Op. 37
Richard Charlton: Sonata?
McDonald-Bianculli Flute & Guitar Duo CDBaby 305125 DDD 60:55
The flute and the guitar go well together. So, it appears, do flutist Kathleen McDonald and guitarist Pasquale ("Pat") Bianculli, who have been making music together since 1977, but only now have gotten around to making a recording. Yes, they are married, and judging by the performances on this CD, they must communicate well – one of the essential ingredients of a successful marriage!
This disc comfortably straddles the classical and folk worlds. Before I am accused of being misleading, however, I most point out that the works by McKinnon and Hand are original works, and do not even quote from traditional melodies, so if they are "folky," they are only so stylistically, and not in the literal sense of the word. Hill of Slane is where Saint Patrick "lit the first Paschal fire in direct defiance of the pagan kings at nearby Tara." Hand's A Psalm of Thanksgiving is an extended meditation on the text of Psalm 100, both reflective and joyful. Both works are written in a simple, communicative style, whose messages of faith, comfort, and gentle determination are delivered with quiet force. Both works feature extended passages in which either the guitar or the flute plays by itself. It's not a lonely sound, though, but one of independence and confidence.
Domeniconi's Sonata betrays a lively interest in music from many parts of the globe. His intricate writing leaves the listener guessing, as flute and guitar good-naturedly jockey for position, and unexpected rhythms and melodic turns quickly sail past his or her ears. The unusual title of Australian composer Richard Charlton's Sonata? is explained by the composer's desire to avoid pre-conceived notions about what a sonata should and shouldn't be. In other words, it's not a joke piece, but a sometimes rhapsodic, sometimes tightly structured, and always generous (melodically speaking) work in three movements.
The works by Bach – the famous one, and his second surviving son – need little introduction, except to say that Carl Philipp Emanuel's so-called "Hamburg" sonata is named after the city in which it was composed, not after what the composer was eating at the time. Both of the works are performed with continuo (usually harpsichord plus cello or gamba), but the guitar works well too.
McDonald and Bianculli play the two works by Bach straightforwardly, emphasizing beauty of sound over individuality. These are not the most personal readings, but there's no denying that they are lovely, and not at all unstylish. They are a practical definition of "galant." More of who these performers are comes out in the remainder of this program. They are dedicated, polished musicians, with a will to communicate, not just with their listeners, but with each other. In its own modest way, this is a "feel good" CD – perfect at the end of a trying day. The engineering is excellent in its warmth and realism, and even the booklet notes have been given unusual attention.
This CD is available from cdbaby.com, where it also is offered as an MP3 download.
Copyright © 2009, Raymond Tuttle. 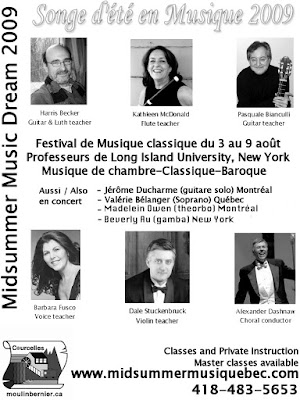