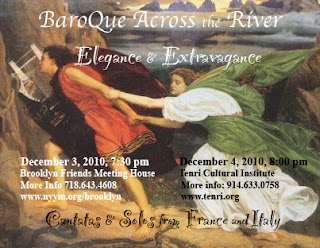 Brooklyn, New York-based early music ensemble BaroQue Across the River will perform “Elegance & Extravagance: Cantatas and Solos from France & Italy” on December 3-4, 2010 in New York City. The December 3 concert will be held at 7:30pm at Brooklyn Friends Meeting House, 110 Schermerhorn Street, Brooklyn (718.643.4608); The December 4, 8:00pm concert will be held at Tenri Cultural Institute, 43A West 13th Street, in Manhattan (914.633.0758). Tickets are $20.00 (suggested donation) at door for both concerts.
Two rival styles dominated European music in the late 17th – early 18th Century — the delicate and demure French style favored elegant melodies in contrast to the more passionate, virtuosic and extravagant style of Italian music. In “Elegance & Extravagance: Cantatas and Solos from France & Italy” BaroQue Across the River offers selections of this exuberant contrast with music by Rameau, Clérambault, Scarlatti, Couperin, and Vivaldi.
(Thanks to Peter McDowell Arts for help with this post.)
at November 20, 2010 No comments:

Our CD featured in podcast devoted to knitting in Australia

My most recent search on the internet revealed that our CD is indeed being played. Go take a listen. You might even learn to knit while you are at it!!!

http://podcast.mbirgin.com/3303/sticksstringpodcast.aspx#divPlayer
David, who runs a knitting show in Australia used a cut from our CD in one of his broadcasts. It is show 133. Jump to 14:00 into the broadcast. We are grateful to hear our music being used.
at November 20, 2010 No comments: