BaroQue Across the River- a hit at the GEMS Festival

from the NY TIMES...September 30, 2008 - BaroQue Across the River, a Brooklyn group, opened the concert with two elegant French cantatas — Rameau’s “Impatience” and Montéclair’s “Ariane et Bacchus” — to which Michèle Eaton brought a sumptuous tone, a keen dramatic sense and striking agility in the ornamental vocal scoring. 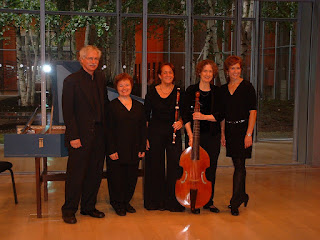 Congratulations to Kathy, Michèle, Arthur and Martha for a job well done. It was a beautiful concert and the praise was well-deserved. Suzanne Bona, the host of "Sunday Baroque", (seen here with Kathy) emceed the event and did the unimaginable - she was able to get classical musicians to talk about what they do in an intelligent and meaningful fashion!! No small feat, Suzanne!! Thanks to Ron Hatem for the great photos. 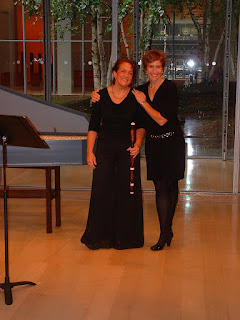 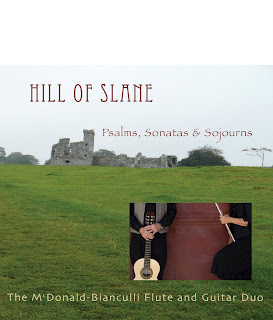 Our new CD has been released. It is available through CD BABY which will market the CD for us. They will also post it for Digital Distribution, so you can download one piece or the entire CD. You will also be able to buy at concerts.
The CD comes with a booklet along with photos by myself and Richard Sutor. It was recorded by John Kilgore and mastered by Richard Price.
We look forward to reading your comments and knowing what you think about our music.
PRESS RELEASE
FOR IMMEDIATE RELEASE: Sept. 10, 2008
The McDonald-Bianculli Flute & Guitar Duo release Hill of Slane – Psalms, Sonatas & Sojourns

BROOKLYN, NEW YORK – Kathleen McDonald and Pasquale Bianculli have released a CD of music for flute and guitar. It is called Hill of Slane - Psalms, Sonatas & Sojourns and features the music of J.S. Bach, C.P.E. Bach, as well as contemporary composers Carlo Domeniconi, Frederic Hand, Arlo McKinnon, Jr., and Richard Charlton. The Hill of Slane is the legendary place in County Meath, Ireland (about 35 Miles NW of Dublin) where St. Patrick was to have lit the first Paschal Fire in the year A.D. 433.  The “Hill” was a spiritual inspiration for composer, Arlo McKinnon, who contributed the title track.

The other works on this CD collection include J.S. Bach’s Sonata in E minor BWV 1034,  played on baroque flute and modern guitar, Sonata in G Major “Hamburg”, by C.P.E. Bach, Sonata, op 37, composed in 1996 by Carlo Domeniconi, Frederic Hand’s Psalm of Thanksgiving (1995), and the first commercial recording of Sonata? by Richard Charlton.

Pat and Kathy, long-time musical collaborators, have been married for 24 years. This is their first recording together. Music has taken them to Curaçao (International Trade Center), Rotterdam (De Douelen) as well as Paris, Quèbec, British Columbia, Italy and Jamaica. Kathy specializes in baroque flute and directs her own ensemble in Brooklyn, NY, Baroque Across the River. Besides C.W. Post, Pat also teaches privately and at the United Nations International School. The CD was recorded in New York at Kilgore Sound and Recording by John Kilgore and mastered at Candlewood Digital LLC by Richard Price.

Hill of Slane is now available from CD BABY (www.cdbaby.com),  and  soon it can be digitally downloaded from iTunes (www.iTunes.com).

Email ThisBlogThis!Share to TwitterShare to FacebookShare to Pinterest
Labels: Hill of Slane